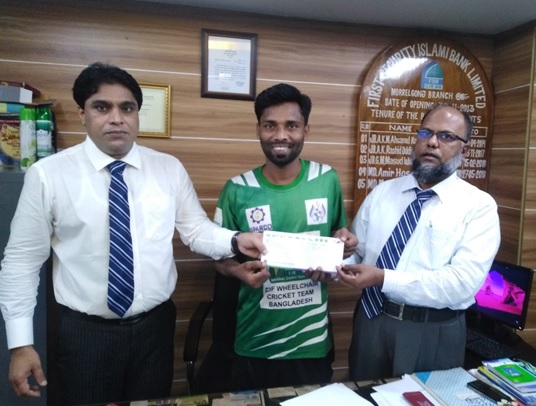 Md. Iqbal Hossain, 26, is the opening batsman of Bangladesh Physically Handicapped Cricket Team. At the age of one and a half, he contracted polio and became paralyzed. From the thigh of his left leg, he gradually became thinner and as a result he lost the ability to move normally. In 2016, Md. Iqbal Hossain got a chance in the national team out of about five thousand competitors after seeing an advertisement in a newspaper for an advertisement for the Bangladesh Physically Handicapped Cricket Team. Iqbal Hossain has participated in several international games at home and abroad. Received many awards. He has brought respect for the country. However, despite earning many honors and awards for the country, financial prosperity did not come to Iqbal’s family. “When I got a chance to play in the national team, I thought that at least my mother and brother should not go without food. I will be able to make the dilapidated house a little stronger this time, but our luck is bad. If not, why should my mother and brother not eat? It is a shame to say that there is no food in the house.” In this way, the opening batsman of Bangladesh Physically Handicapped team Md. Iqbal Hossain was expressing his frustration. Her father died about 20 years ago. Due to not playing regularly, he was forced to work in a food hotel. But due to Corona Pandemic, the work of the hotel was also stopped. As a result, he spends his days with his family half-starved. Knowing about his plight through various newspapers, First Security Islami Bank Ltd., a popular modern Shariah based bank of the third generation, has come forward in this difficult time. From their social responsibility fund, FSIBL has started giving cash assistance to the physically challenged cricket team cricketer Md. Iqbal Hossain every month from August 2021. Md. Iqbal Hossain was very happy to hear the news of this help and thanked Allah Almighty with tears in his eyes and also expressed his gratitude to the Managing Authority of First Security Islami Bank Ltd. He also commented that as a result of this assistance, his family will no longer have to spend half a day on starvation.